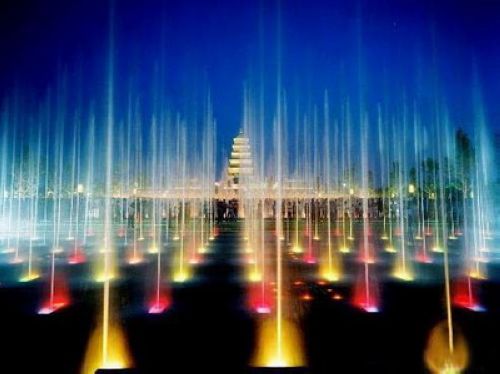 In the LED industry chain, key technologies such as upstream chips and extensions are firmly controlled by international manufacturers (Philips Lumileds, CK, CREE, Nichia, OSRAM, etc.). The domestic LED competition market is mainly concentrated in the midstream processing, downstream terminals and some low-value supporting industries, and has formed four major industrial chain regions in the Pearl River Delta, the Yangtze River Delta, the northern region, and the Lancang Delta region.

With the popularization of high-power LED lighting, the requirements for thermal performance of product components have become higher and higher. Efficient thermal management has become the key to constraining the development of high-power LEDs. At present, high-efficiency energy conversion and thermal energy control in the LED industry is mainly achieved through three aspects: chip, package, and system integration. There are mainly two ways to improve the structure and apply new materials.

The application of new materials is the focus of the current research on LED thermal management. The use of high thermal conductivity materials directly directly enhances the performance of components. In the lighting industry's transformation from traditional lighting to LED lighting, its thermal materials have undergone the transformation from the first and second generations to the third and fourth generations of advanced materials. The traditional materials are gradually being made of diamond series composite materials, carbon materials, and thermal interface materials. Replaced by the new materials represented. More and more new materials are used in LED substrates and packages.

In the case of the LED industry, the use of new materials on substrates and packages has important implications for the efficient thermal management of LEDs. This article focuses on the introduction of new thermal materials and their performance in the LED industry in China. The main products are diamond series composite materials, silicon carbide aluminum, carbon materials, and other materials.

The fourth-generation high-thermal and low-expansion diamond/copper thermal conductivity developed by the Beijing Nonferrous Metal Research Institute reached 650 W/m?K and the coefficient of thermal expansion was 5-7x10-6/?C, which is comparable to similar foreign products. Leading the domestic market, it has applied research in heat sink parts such as high-power semiconductor lighting devices. The application of diamond/copper composite material on high-power LED devices has a significant heat dissipation effect. The junction temperature is reduced by 10.6%, thermal resistance is reduced by 33.3%, and the life and reliability of high-power LED devices are greatly improved. This material is fully utilized. The advantages.

Second, silicon carbide aluminum silicon carbide/aluminum is based on aluminum alloy, silicon carbide particles reinforced with particle reinforced metal matrix composite material, the fusion of silicon carbide ceramics and metal aluminum different advantages. Due to its high thermal conductivity, thermal expansion coefficient matching the chip, low density, light weight, and high hardness and high bending strength, it has potential applications in LED electronic packaging. Silicon carbide/aluminum is widely used on substrates, and there are a number of companies such as the Research Institute of Research, Jiangsu Ding Qi (agent of the United States TTC materials) and other production. The new type of silicon carbide-aluminum composite material produced by the Beijing Nonferrous Metal Research Institute has the characteristics of â€œlight, hard, rigid, delicate, inexpensive, and beautifulâ€, and meets the requirements of light weight and high density of the package. It is suitable for LED and aviation applications. , aerospace, electronic components, housing packaging and other wide areas.

Fourth, other materials In addition to the above-mentioned new materials, the domestic LED lighting market uses a variety of new thermal conductivity materials: such as molybdenum copper, tungsten copper, copper-molybdenum copper-copper, vapor grown carbon fiber, carbon nanotubes, thermal insulation silicone material , thermal grease, potting silica gel and so on. In the development and application of new materials, only a few companies in China (such as the Beijing Nonferrous Metal Research Institute, etc.) have comparable strengths with internationally renowned companies.

With the promotion of green buildings, energy conservation and environmental protection, LED commercial and civil lighting have entered a good time for development. However, domestic LED industry manufacturers still face market pressure at the low end of the industrial chain, lack of independent intellectual property rights, and high production costs. Due to the limitations of structural improvements in LED thermal management, new materials are the key to LED heat dissipation. In the improvement of LED lighting, in addition to the performance of the product itself, the application of the new type of heat-conducting material still needs to consider many factors such as production cost, operability of large-scale production, and market demand. The improvement of the performance of the new thermal conductive material, the improvement of the packaging process, and the modular packaging have gradually become the research hotspots for the efficient thermal management of the LED industry.