1. The role of the connector

Connectors, also known as connectors, are mainly used to provide convenient electrical plug-in connections in electronic products and power equipment. They are widely used in electronic equipment, which greatly improves the efficiency of production and maintenance of electronic products. Due to the large number of plug-in connections, the reliability of the connection and the size of the contact resistance are becoming more and more important for the quality of the product. Therefore, it is necessary to fully understand the performance of the connector used in order to reasonably and correctly Use connectors. 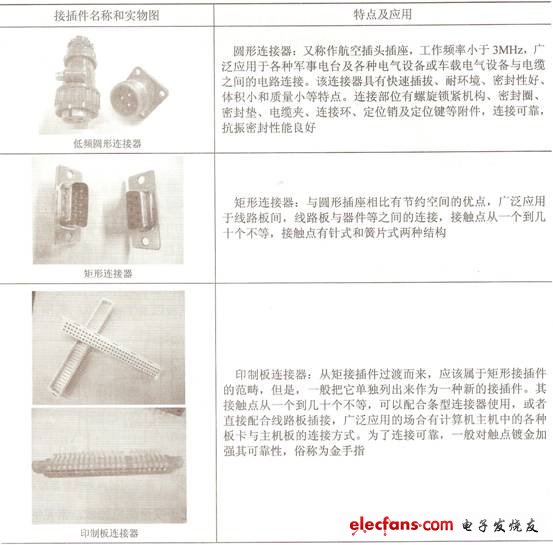 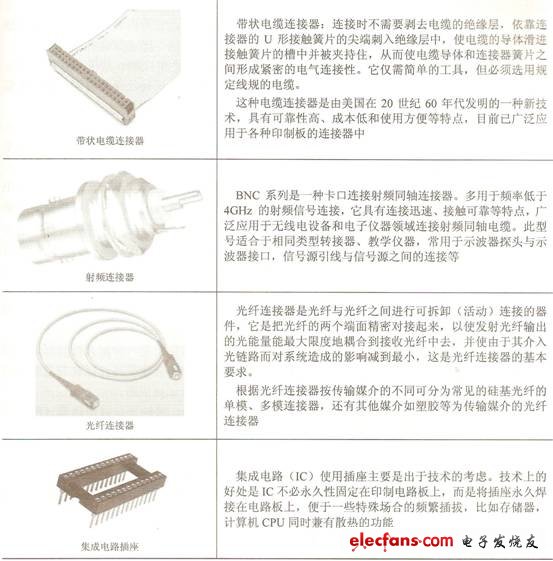 (1) The basic structure of the connector

The cathode contact is the jack. It is a key part of the contact pair. The elastic structure depends on the elastic deformation when the pin is inserted and generates elastic force to form close contact with the positive contact to complete the connection. There are many types of jack structures, such as cylindrical type (slotted and narrowed), tuning fork type, cantilever beam (longitudinal slot), folding type (longitudinal slot, "9" shape), box shape (square jack ) And double-sided thread spring jacks, etc.

â‘¢ Shell. The shell is also called the shell (depending on the variety), which is the outer cover of the connector, which provides mechanical protection for the built-in insulating mounting plate and pins, and provides alignment when the plug and socket are mated, thereby fixing the connector to On the device.

4. The basic performance of the connector

The main electrical properties of the connector include contact resistance, insulation resistance and electrical strength.

â‘¡ Insulation resistance. The indicators for measuring the insulation performance between electrical connectors and between contacts and housings are on the order of hundreds of megohms to thousands of megohms.

For RF coaxial connectors, there are electrical indicators such as characteristic impedance, insertion loss, reflection coefficient, and voltage standing wave ratio. Due to the development of digital technology, in order to connect and transmit high-speed digital pulse signals, a new type of connector, that is, a high-speed signal connector, has appeared. Accordingly, in terms of electrical performance, in addition to characteristic impedance, some new electrical indicators have also appeared , Such as crosstalk, transmission delay and time lag.

â‘¢Salt spray resistance. When the connector is working in an environment containing moisture and salt, the surface treatment layer of its metal structural parts and contact parts may produce galvanic corrosion, which affects the physical and electrical properties of the connector. In order to evaluate the ability of electrical connectors to withstand this environment, a salt spray test is specified. It hangs the connector in a temperature-controlled test chamber, sprays it with compressed air of a specified concentration of sodium chloride solution to form a salt spray atmosphere, and its exposure time is specified by the product specification, at least 48h.

â‘¤Other environmental performance. According to the requirements of use, other environmental properties of electrical connectors include sealing (air leakage, liquid pressure), liquid impregnation (ability to resist specific liquids) and low air pressure.

Our company offers rubber, and specialty seal and o-ring for molding electronic and electrical connectors, both circular and rectangular types. We have in house capabilities and quick turn around.