Ultraviolet LED has the advantages of small specific product, long life and high efficiency, and has broad application prospects. At present, the luminous power of the ultraviolet LED is not high, and in addition to the improvement in the level of chip fabrication, the packaging technology also has an important influence on the characteristics of the LED.

Currently, UV LEDs are mainly available in epoxy and metal and glass lens packages. The former is mainly applied to near-ultraviolet LEDs of around 400 nm, but ultraviolet light has a great influence on the aging of materials. The latter is mainly applied to ultraviolet LEDs with wavelengths less than 380 nm. Since the refractive indices of GaN and sapphire are 2.4 and 1.76, respectively, and the refractive index of gas is 1, a large refractive index difference causes total reflection to be more restrictive to light. Light extraction efficiency is low.

Based on the packaging technology of UV LEDs with wavelengths less than 380 nm, this paper compares the transmittance, UV resistance and heat resistance of different packaging materials, and then proposes an ultraviolet LED package structure with high light efficiency and high reliability.

The optical power and peak wavelength were measured on the PMS-50 enhanced UV-Vis-NIR spectroscopy system of Hangzhou Yuanfang Company. The optical transmittance measurement system is shown in Figure 1. The monochromator is the CM200 of Jiangsu Weixin Technology Co., Ltd., the light source is the GY-10 high-pressure spherical xenon lamp of Tianjin Top, and the signal acquisition and processing system is far away. The company's UV-Vis analysis system. 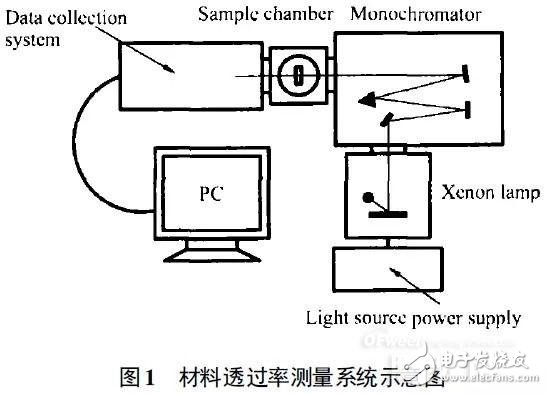 The thermal stability of the material was evaluated as a function of time. The sample has a thickness of 2 mm and is placed in an oven at a constant temperature and temperature of 150 Â°C.

The transmittance of quartz glass, silicone and epoxy is shown in Figure 2. Silicone and epoxy resin are first injected into the mold, and after high temperature curing, the mold is released to form a sample having a uniform thickness of 5 mm. For the sake of comparison, according to Bouguer-Lam-bert's law, the measured values â€‹â€‹are converted into the transmittance at a thickness of mm-1.

The aging of epoxy resins A and B and silicone resins A and B at 395 nm and 375 nm LED chips was investigated, as shown in Figure 3. In the experiment, the resin coating thickness of each LED was 2 mm. 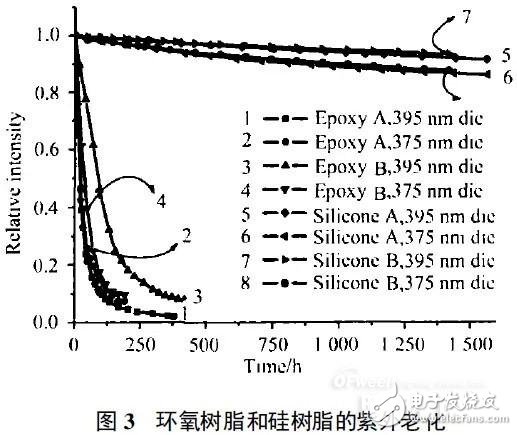 It can be seen that the epoxy resin has poor UV radiation resistance. When working continuously, the output power of the UV LED is rapidly attenuated. After 100h, the output optical power drops below the initial 50%. After 200h, the LED output light The power is already very weak. For the alicyclic epoxy resin B, the attenuation at 375 nm is faster than that at 395 nm, indicating that it is sensitive to the wavelength of ultraviolet light. Since the photon energy of 375 nm is larger, the damage is more serious.

The bisphenol epoxy resin A decays rapidly under ultraviolet light of 375 nm and 395 nm, and the decay rate is basically the same. Although the bisphenol-based epoxy resin A has a light transmittance at 375 nm and 395 nm which is slightly higher than that of the alicyclic epoxy resin B, since the epoxy resin A contains a benzene ring structure, it is continuously irradiated with ultraviolet light. The attenuation is faster than epoxy B. The optical power of the LED chip before and after aging was measured, and it was found that the optical power of the LED after aging was substantially not attenuated.

Compared with epoxy resin, silicone resin exhibits good UV resistance. After nearly 1500h aging, although the LED output optical power has different degrees of attenuation, it still maintains above 85%, and the attenuation is less than 15%. This may be related to structural differences between silicone and epoxy. The main structure of silicone resin includes Si and O. The main chain Si-O-Si is inorganic and has a high bond energy (422.5 kJ/mol). The main chain of epoxy resin is mainly CC or CO. They are 356kJ/mol and 344.4 kJ/mol, respectively. Due to the higher bond energy, the performance of the silicone resin is relatively stable. Therefore, the silicone resin has good ultraviolet light resistance.

LED packaging places higher demands on the heat resistance of materials. As can be seen from Figure 3, epoxy resin B and silicone resin B have better ability to withstand ultraviolet light irradiation. Therefore, its thermal stability was studied. Figure 4 shows the change in transmittance of these two materials over time at a thickness of mm-1 after high temperature aging. It can be seen that the heat resistance of the epoxy resin is poor. After high temperature aging for 6 days, the transmittance of each wavelength is greatly attenuated, and the attenuation of the ultraviolet light range is particularly serious. The initial clearness turned into a tan. 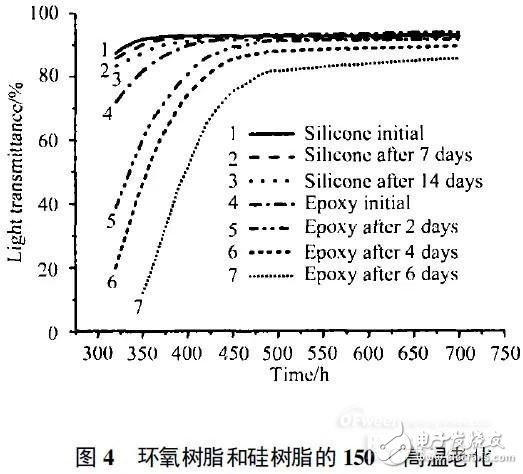 Silicone exhibits excellent heat resistance. In the high temperature environment of 150 Â°C, after 14 days of aging, the transmittance of the sample in the visible range is only slightly attenuated at the thickness of mm-1, and there is only a small amount of attenuation in the ultraviolet range, and the color remains initially clear. Transparent. Unlike epoxy resins, silicone resins have Si-O-Si bonds as the main chain, and Si-O bonds have excellent heat resistance due to their high bond energy and ionization tendency.

According to the experimental results, combined with silicone resin and quartz glass material, a new UV LED packaging method is proposed, as shown in Figure 5. 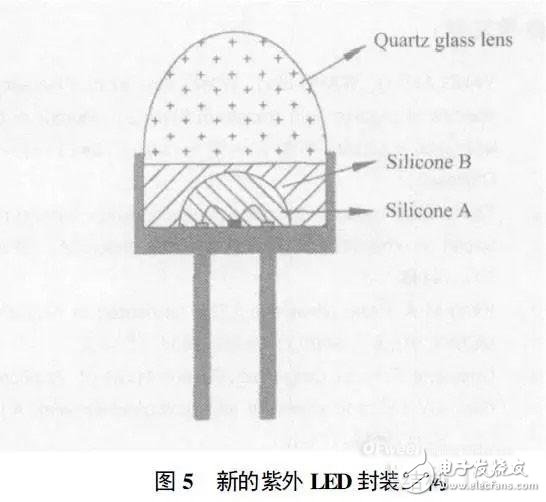 In the entire structure, in order to minimize the absorption loss of ultraviolet light by the silicone resin, the thickness of the resin layer is thin. At the same time, the three-layer structure with decreasing refractive index layer by layer is beneficial to reduce the Fresnel loss of light during propagation.

The table below shows the optical power before and after the UV LED package in different package configurations.

It can be seen that in the case of the same peak wavelength of the LED chip and the similar power of the die, the ultraviolet LED of the new package structure has an output power increase of more than 60%, and the light extraction efficiency is 2.7 times that of the metal and glass lens package. Compared to epoxy-encapsulated UV LEDs, the UV efficiency of the new package structure is low, but the stability is much better than that of epoxy-encapsulated LEDs. The aging experiment shows that the ultraviolet LED light-emitting power of the epoxy resin package has been attenuated to less than 50% in less than 100 hours. The UV LED of the new package structure has good stability. After 800 hours of continuous operation, the luminous power is still maintained above 95%, and the luminous power attenuation is less than 5%.

The UV-emitting efficiency of the new package structure is 2.7 times that of the metal case and the glass lens package LED. At the same time, it has good stability. It works continuously for 800h, and the luminous power attenuation is less than 5%. 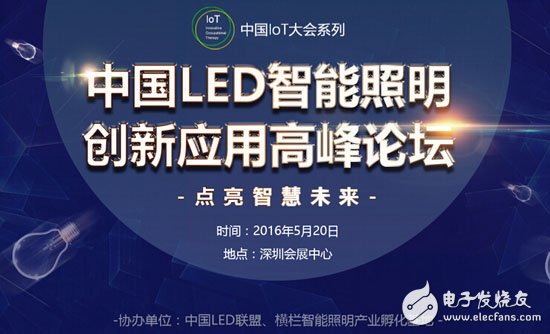