At 0:11 on December 11, China successfully launched Fengyun-4 satellite with the Long March 3B carrier rocket at the Xichang Satellite Launch Center. Fengyun No.4 satellite has realized the upgrading and technical leap of China's geostationary orbit meteorological satellites, and will observe the high temporal resolution, high spatial resolution and high spectral resolution of the atmosphere, cloud and space environment in China and surrounding areas. Weather forecasting and climate prediction capabilities. 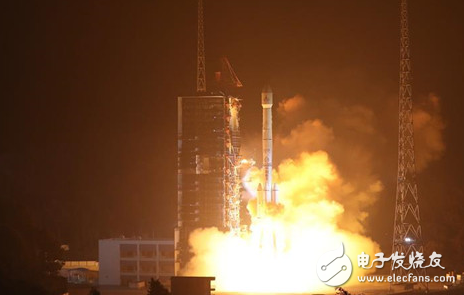 On December 11, the launch vehicle carrying the Fengyun-4 satellite was ignited at the Xichang Satellite Launch Center.

500 flashes in one second

According to the report, in addition, Fengyun No. 4 can also observe the typhoon area every three minutes to make up for the shortcomings of the current in-orbit satellite image resolution, and provide effective support for disaster and environmental monitoring, artificially affected weather, and space weather research. .

Zhang Zhiqing, chief engineer of the Fengyun-4 satellite ground application system, said, â€œThe Fengyun No.4 geostationary meteorological satellite is the world's most advanced and even leading weather satellite. The ground application system built this time is the most complicated ground system to date. After that, it will form a new generation of geostationary meteorological satellite observation system together with existing satellites. The synergy between the stars and the ground will be efficient and the application benefits will be realized."

He pointed out that high-temporal resolution imaging data, lightning monitoring data, atmospheric three-dimensional temperature and humidity detection data and space weather monitoring data of Fengyun No. 4 geostationary meteorological satellite will be in weather monitoring and forecasting, meteorological disaster prevention and mitigation, climate change response, and ecological environment monitoring. In the fields of aviation and space weather, it is widely used.

Dong Yaohai, chief engineer of Fengyun No.4 Satellite System, pointed out that "As a new generation of geostationary orbit meteorological satellites in China, Fengyun No. 4 satellite adopts a new overall scheme and a new load configuration. The key technologies are breakthroughs and many independent innovations are achieved."

He introduced, in summary, Fengyun-4 satellite mainly reflects three major characteristics. The first is new technology. With the development of meteorological services, the realization of high-precision, high-aging, high-frequency ground observation is the development trend of world meteorological satellites. Fengyun No.4 satellite benchmarking is world-class, successfully breaking through more than 20 key technologies representing high-precision image positioning and registration, micro-vibration measurement and suppression, and quantitative remote sensing, which have been at the forefront of the world, and filled many domestic gaps. In particular, the image localization and registration technology has been verified by ground test, and the positioning accuracy can reach 1 pixel. It is on the same starting line with the latest high-altitude meteorological satellites abroad, which further improves the development capability of China's geostationary orbit quantitative remote sensing satellites. Advanced level.

Second is the platform new. For the first time, the satellite used the newly developed SAST5000 platform from the Aerospace Science and Technology Institute. The platform uses a six-sided cylindrical configuration, a single solar wing, and a three-axis stability control scheme. It uses a dual-bus system, high-performance AOS technology, and high-power power. A series of key technologies, such as the whole star anti-static technology and the whole star anti-pollution technology, have the characteristics of large carrying capacity, low centroid, small mechanical response and large ground. Unlike Fengyun No. 2, which is similar to the spin-stable method of the gyro-rotation, Fengyun No. 4 adopts a three-axis stabilization method, which can easily achieve 24-hour gaze on the Earth at high altitude. The utilization time of the Earth observation time is close to 80%, which will be stable. The meteorological business observations provide effective support and the overall level is internationally advanced.

The third is the new load. Fengyun No. 4 is the first high-altitude meteorological satellite in the world to simultaneously load multi-channel scanning imaging radiometers and interferometric atmospheric vertical detectors. The imaging channel of the multi-channel scanning imaging radiometer has increased from 5 to 14 in Fengyun 2, covering 3 visible light and 11 short-wave infrared, medium-wave infrared and long-wave infrared, and the number of channels has increased nearly 3 times. The 16 channels of the launched GOSE-R are equivalent. At the same time, the accuracy of the on-board radiation calibration is 1K and the sensitivity is 0.1K. That is to say, the satellite has an error of less than 1 Â°C when measuring the ground temperature, and can be perceived as long as a change of 0.1 Â°C occurs. In addition, the satellite full-disc imaging time is 15 minutes, and the regional observation capability is 3 to 5 minutes, which is equivalent to the new generation of geostationary orbit meteorological satellites in Europe and America.

The newly developed interferometric atmospheric vertical detector is installed on the meteorological satellite for the first time in the world. The detector has 1,700 detection channels, which can realize high-precision quantitative detection of the atmospheric structure in the vertical direction. In other words, it not only realizes the leap from black-and-white TV to color TV, but also can scan the atmospheric environment for CT scanning and slice observation, which greatly improves the ability of meteorological observation.

China's â€œFengyun Familyâ€ has long been famous. At present, more than 2,500 domestic users and more than 70 countries and regions receive and use Fengyun satellite data. The Fengyun series satellites have been included in the international meteorological service satellite sequence by the World Meteorological Organization, and are the main force of the eastern hemisphere weather forecast.

The Fengyun-4 satellite project was organized and implemented by the National Defense Science and Technology Bureau. The main satellite user is the China Meteorological Administration. The satellite and launch vehicle are respectively developed by China Aerospace Science and Technology Corporation Shanghai Aerospace Technology Research Institute and China Launch Vehicle Technology Research Institute. The measurement and control communication system is under the responsibility of Xi'an Satellite Measurement and Control Center. The ground application system is under the responsibility of the National Satellite Meteorological Center of China Meteorological Administration. The launch mission was the 242th launch of the Long March series of launch vehicles.

China Aerospace Science and Technology Corporation's Eight Hospitals said that the Fengyun series of satellite applications have achieved remarkable results and provided important support for many industries and applications. More than 2,500 users have received and utilized Fengyun satellite data in China, which has effectively protected disaster prevention and mitigation. Application needs for changes, ecological environmental protection, etc. In addition, Fengyun series meteorological satellites have also been included in the international meteorological service satellite sequence, and more than 70 countries and regions have received and applied Fengyun satellite data, which has determined China's international status in the field of global observation and enhanced relevant international activities. The right to speak.

Zhao Jian said that the successful launch of Fengyun-4 satellite is of great significance, not only can more accurately carry out weather monitoring and forecasting, numerical forecasting, climate monitoring, but also disaster and environmental monitoring, artificially influencing weather, and supporting the frontier exploration of atmospheric science. And space weather research to enhance strong support; and will contribute to improving the global observation capability of China's meteorological satellites and making applications for the development of global observing systems, significantly enhancing China's ability to participate in global competition and increasing China's relevant international activities. The right to speak.