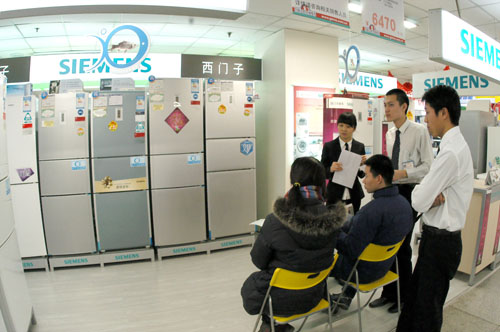 Compared with the red-hot inverter air conditioner market, inverter refrigerators have been overshadowed in recent years. Since the 2009 sales exceeded one million units, the 2011 inverter refrigerator market has not seen much improvement. In spite of this, Haier, Hisense and other companies have been continuously reducing the frequency of frequency conversion. From the perspective of the concentration of new products launched in 2011, companies have a lot of wrestling market momentum. However, the current consumer awareness of inverter refrigerators is not high, coupled with the lack of self-sufficiency in the upstream core components, the lack of other protagonists, the company this seemingly lively "one-man show" can sing for how long?

From January to October 2011, the market share of inverter refrigerators was only 8.66%.

In 2011, the growth of China's refrigerator market showed signs of weakness and the growth rate slowed down significantly. According to the monitoring data of Zhong Yikang, from January to October, the retail sales of refrigerators and retail sales only increased by 3.39 percent and 4.23 percent respectively over the same period of last year. Although the accumulated sales of inverter refrigerators reached 934,000 units in the same period, the growth rate reached 22.69 percent, but the market was 8.66%. The proportion of the market share of 47% of inverter air conditioners and the same period is not the same.

The reporter learned from the interview that refrigerator inverter compressors can control temperature fluctuations in a relatively small range while controlling the speed of rotation. Therefore, compared with ordinary refrigerators, the most significant advantage of inverter refrigerators is their good preservation effect. Low noise. However, many consumers do not understand these advantages. Zhang Yanbin, director of the Ovid Consulting and Research Institute, told the â€œChina Electronics Newsâ€ reporter that at present, only Haier, Siemens and other refrigerator manufacturers have spared no efforts to promote frequency conversion products, but in the face of a huge market, the voice of several companies is obviously not big enough. At present, consumer awareness of inverter refrigerators only stays at the conceptual stage.

The reporter learned that in recent years, due to the rapid growth of production, the problem of overcapacity of refrigerator compressors is very prominent. Once the increase in production costs, companies are often passive and cannot communicate stress. Therefore, product structure adjustments are made to high-end inverters. Compressor transformation has become the consensus of the industry. However, a person in charge of the compressor company told reporters that the production of variable frequency compressors requires a lot of investment. Without a breakthrough in overall sales, most companies are reluctant to take risks.

In addition to market factors, the immature supporting technology also hindered the development of variable frequency compressors. It is understood that due to the lack of reserve in the electronic control technology of domestic compressor companies, trial-commercial products can only provide bare-metal machines, and control boards that are compatible with inverter compressors can only be commissioned by other companies or purchased by refrigerator companies themselves. Zhang Changqun, chief engineer of Gasibaila Compressor Co., Ltd., revealed to the reporter of China Electronics News that the price of the inverter control board on the market is between 100 and 120 yuan. It can be seen that the high cost has also directly pushed up the selling price of the end product, affecting the large-scale start-up of the market.

However, he said that Changhong and Huayi Compression have all set up frequency conversion technology research institutes, and jointly develop frequency conversion control boards with Japanese manufacturers. In 2012, it is expected to achieve technological breakthrough in the overall support and provide support for mass production.

Need all parties to cooperate

In the future, the inverter refrigerator market will become bigger and stronger, requiring the joint efforts of all parties.

China Household Electrical Appliances Association clearly stated in the "12th Five-Year Plan for Development of China Household Appliance Industry" that during the "12th Five-Year Plan" period, domestic home appliance companies should "develop their own advanced frequency conversion technology independently. Key areas include variable-frequency drives. Technology, inverter compressors, etc." The first technology roadmap of the home appliance industry also regards frequency conversion technology as an important direction for future home appliance industry research and development needs. It can be seen that the inverter refrigerator will be one of the competition priorities in the future market.

Zhang Yanbin believes that in order to achieve a qualitative breakthrough in China's inverter refrigerators, it requires the joint efforts of manufacturers and compressor suppliers. As far as manufacturers are concerned, efforts must be made to promote products, so that consumers can truly appreciate the outstanding advantages of inverter refrigerators in fresh-keeping and noise-reduction. At the same time, they must enrich the product line, try to install frequency conversion technology in products below 300L, and expand target consumption. Group; In terms of compressor suppliers, it is necessary to increase technical research and development efforts, and gradually form a complete supply system of inverter compressors and control boards for the complete machine manufacturers to reduce the price of terminal products.

At the same time, the market's maturity cannot be separated from related policy support. Japan is a relatively developed country with variable frequency technology. Currently, the market share of inverter refrigerators has reached 80%, which is mainly due to the government's relevant subsidies. However, for a long time, the subsidies of China's relevant departments for the frequency conversion products have been ambiguous.

The reporter learned that at present, foreign companies such as Embrak and Zanusi rely on mature technologies and still firmly hold the right to speak of inverter compressors. They are the main suppliers of Haier, Siemens and Hisense, and Embrak has received a few days ago. In China's market, a new aluminum-line inverter compressor has been introduced. It can be said that China's compressor companies have always played the role of catch-up and imitation. But even so, the entire industry takes a long-term perspective and an open mind to treat technological competition and market development, which may be more favorable for the popularity of inverter refrigerators in China.

Zhang Yanbin also admitted that the market and technology complement each other. Policy support can not only expand the market, but more importantly, it can increase the enthusiasm of the company's technology investment and R&D, and ultimately complete the transformation and upgrading of the entire industry.

PCB Assembly = Printed Circuit Board Assembly, which means to assemble the electronic components on blank printed circuit boards. After assembly done, the components would be connected together through the copper circuits on PCB .

With our 15years professional experience, we are available for all types of PCB assembly service from prototype to mass production, available for 01005, 0201, 0.3mm BGA, 0.3mm QFP.